The scofflaws of Wall Street and their criminal cohorts within the FED, the Central Bank administrations in Europe, the IMF and their international, vampire-like partners, are openly embarked on a grab for political power. This, of course, involves the seizure of as much money, and as many fiscal and physical objects as their can lay their hands on. So they proceed, right under our noses,  in their attempt to reduce everything, including human rights, national sovereignty, individual and natural assets, --even including the fundamental health and well being of all of us,-- into mere toys for amusement,  and objects at their disposal.

They have bought and sold governments. But Prime Minister Tsipras and the Syriza Party say that Greece and its legacy will not be sold off.

It is shocking that these criminal forces have gotten as far as they have: traffickers in human flesh, ghouls who have dismembered whole societies with military and financial weapons at the ready. These are people who have had nations plundered, and who arrange or foment devastating wars; and indeed, they have tried to turn organized, industrial scale murder into a cultural artifact, a perpetual cost of doing business.

But the resistance to this empire is global, and people have become more conscious of its methods, and of what is at stake, in terms of basic human decency, democratic process, and justice. 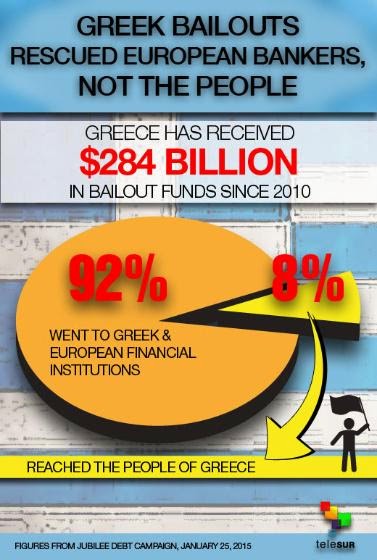 Austerity regimes, imposed by criminal financial institutions, are not constructed in order to help any nation pay off its debt; but rather austerity is designed to further weaken and disable the target nation, the victim of the scam, and to suppress that nation's economic growth, while pretending to bolster it with further loan installments. The so-called "bail-out" project is  insidiously designed to force the country to sell off its assets, as well as its effective sovereignty, and turns the country into another stock to be traded on the market. What was unique, beautiful, the people's dignity and history, cultural autonomy, self-determination, possessions, lands, even monuments, would be liquidated on the auction floor.

Let us resolve not to let this happen! In whatever country we call our own, a promise must be made to oppose, to resist this kind of oppression.

The system of government must become honest again, and reflect the honesty and exertions of its people, their insistence on the rule of law, their own just laws. It is up to them, in a democracy, to see that the laws are just, and are applied equally.

Prime Minister Tsipras, and Syriza, have inspired many others beyond the borders of Greece. Now is the time to remember what was said about the importance of Greeks, the spirit and fulfillment of human possibilities, when they stood to enter the European Union. A French politician remembered  the ancient democracy, what Greek democracy means everywhere, and its heritage. He said the event should not be described as their entry into the Union; but rather that "Europe has joined Greece".

This is one promise that has yet to be redeemed. 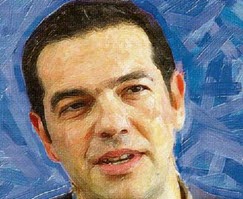