Arthur Silber writes of Obama's recent extensive deliberation over what to do in Afghanistan, and the protracted appearance of seriousness over the decision, and the writer believes that "The mountains have appeared to labour mightily--with strong emphasis on "appear," for image and PR is not the main thing at this stage of the disintegration of the American Empire, it's the only thing..."

Obama wants to appear careful, prudent; and in a couple of days he will enlighten the public about "the job" that he will be careful to get done there. There will be an increase in US combat troops of something like 35,000. On a recent Bill Moyer's Journal, the actual recorded conversations between President Lyndon Johnson and Defense Secretary McNamara and conversation between House Speaker Mansfield and the President shows beneath LBJ's surface the age old fear of being out-hawked by the right-wing. The President understood, or seemed to understand, that it was a mistake to give in to military escalation; but he did so anyway, knowing on some level the wrongness of it.

Obama is a smart man and is always projecting some kind of cool rationality; but he would seem to be doing the same thing LBJ did. Our new president however doesn't reveal that much in the way of the agony of such a decision.

It is a bloody absurdity for Obama to speak so eloquently and proclaim political principles so lucidly, only to backtrack on those principles and then proceed in the opposite direction. Weakness or dancing to the strings of puppet masters? We don't know. Today's President Karzai, while perhaps not as murderous as President Diem once was, is saturated in the same kind of corruption. Obama falls, as Lyndon Johnson did, into the same kind of political snare; and it seems perhaps reasonable to question his powers of reason.

Every remaining illusion will be stripped away and deconstructed; and after Obama comes a kind of deluge; but meanwhile during his tenure of office is this eerie twilight when things seem very surreal here in the belly of the beast.

I like the way Arthur Silber opens his essay, with the words of Horace:

The mountains will be in labour; an absurd mouse will be born.

This article is cross-posted at le speakeasy

Why Americans Don't Have Decent Health Care And Probably Never Will

After the movie one night,
I went into one of those
big chain ice cream parlors,
the kind of place where they mix your
cool fluff on a marble slab,
carefully weigh it,
top it off if necessary
(or take some away)
then hand it to you
and
take your money.

So when the girl handed me my
chocolate amaretto with sprinkles on top
I noticed at least half a dip left on the slab.
“What are you gonna do with that?” I said.

“Throw it away,” she said
and started to scrape it off the counter.
“Wait a minute, why don't you
give it to me, I'll eat it.”

“But you're throwing it out, so it's
lost anyway.”
“Either I have to charge for it
or I have to throw it away.”

“They watch us through a camera.”

“So they watch you through a camera?”
“Yeah.”

“How much do they pay the person
to watch you throw ice cream away?”
“I don't know.” She looked at me.
“Do you want this?”

And she scraped it in the trash.
Posted by Grayson at November 09, 2009 No comments: 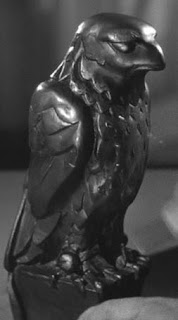 The coveted Maltese Falcon has been awarded to President Obama, in anticipation of some unfortunate policies he inherited from either Bush or Cheney; whose dirty business he plans to continue. Such would be Our Falcon of Perpetual War and Secrecy: the surveillance state, indefinite detention, unnatural rendition, banker's ejaculations, and the cover-up of the CIA/Pentagon torture affairs, to name but a few.

In order therefore to balance the positive encouragement which Norway has lately invested in him, with the Nobel Peace Prize; he has been awarded The Bird, as a countermeasure that signifies the public's unrealized hopes out of his own grandiose inertia. If Obama can accept the Nobel for the better choices he could make in the future, as president; then he is equally obliged to graciously accept a dousing with cold water.

He must clutch the Maltese Falcon; for what other choice has he allowed himself?

The president encourages the same activists who helped elect him, to make him do real things (as opposed to simply humping the bully pulpit). I say that before the President is swayed by advisers who tell him that the lefty folks and assorted progressive bloggers are "unreliable", that we should prove those sourpusses wrong, by jumping on the President's Awards Train. Like good sports, we should get up a Lifetime Achievement award for him, and sign endorsements in the spirit that moved the good people of Norway, for the day when the US Air Force will quit rubbing out Afghan kids. Perhaps the Academy of Arts and Sciences can present Obama a preemptive Oscar, trusting that his lifetime of achievement is inevitable, in the category of "Best Performance by a Leading Man".

And from the graveyard of empires comes a new trophy for the president's desk: the Gilded Poppy, soon to be announced by the Karzai Brothers of Afghanistan.

The rhetoric of hope, and revival of inspiration that Obama has perfected, with its resonance in the future, must require a real proliferation of awards. The President will have to give himself the Medal of Freedom to top it all off.

The journalist, Naomi Klein, has said this about the Peace Prize, "I think the moment of just rewarding Obama for awakening hope and optimism has clearly passed."

Klein goes into the depressing developments following the UN-sponsored investigation of Israel's recent military crackdown in Gaza. The overwhelming force that invaded the ghetto included bombardment with white phosphorous and the casual shooting of civilians, a few of whom were held at gunpoint before being shot. The South African jurist, Richard Goldstone, completed an exhaustive investigation which was widely acknowledged as fair, as being unbiased.

And the Obama administration wasted absolutely no time in selling out Judge Richard Goldstone with no basis of fact whatsoever. The report was extremely balanced. The Obama administration could have stepped back and allowed it to work its way through the UN system, really kind of hid behind the UN on this one. Here you have a judge with an extraordinary international reputation for his belief in international law and his commitment to the reality of the—of “never again,” whether in the context of Rwanda or the former Yugoslavia. And this is somebody who’s really, really been committed to that idea. And the US has allowed his reputation to be destroyed, and contributed to it in many ways. So this is a moment where Palestinians more and more are saying, “OK, you raised our hopes, and now you’re dashing them.”

Obama disappoints some in the gay community because of his delay in repealing the "Don' Ask, Don't Tell" policy, which has allowed gays to serve in the military, but still holds them behind a wall of silence, confined by stigma and ostracism.

And NOW's Illinois Chapter can recall that Barack Obama used his strong oratory to condemn George W. Bush for leaving the 4th Amendment in tatters, with a call to restore Americans' rights of privacy and freedom from being spied on.

Yes, I would vote to repeal the U.S. Patriot Act, although I would consider replacing that shoddy and dangerous law with a new, carefully crafted proposal that addressed in a much more limited fashion the legitimate needs of law enforcement in combating terrorism (for example, permitting a warrant for the interception of cell phone calls, and not just land-based phones to accommodate changes in technology).

Fast-forward through the 2008 election campaign, when Obama shocked progressives and liberals by letting the telecoms off the hook, for aiding and abetting the Bush surveillance crimes. Let's see what happened earlier this month, when the Senate dealt with the odious provisions of the Patriot Act. No, they could have let the "sunset provisions" take effect in December, as scheduled. But they didn't.

Instead, the [Senate Judiciary] Committee just passed a bill to renew all of the PATRIOT powers that were set to expire at the end of the year, with only a handful of the original reforms that were first proposed by Senators Feingold and Durbin's JUSTICE Act and Committee Chairman Leahy's original PATRIOT renewal bill.

Instead of adding more protections to the bill, as EFF and the Times have been urging (along with many other Americans who have been organizing Facebook and Twitter activism around PATRIOT reform), the Committee this morning voted to accept seven Republican amendments to the USA PATRIOT Act Sunset Extension Act to remove the few civil liberties protections left in the bill after it was already watered down at last Thursday's Committee meeting. Surprisingly and disappointingly, most of those amendments were recommended to their Republican sponsors by the Obama Administration.
(EFF)

What kind of FBI do we have? What kind of country is this, where librarians can still be gagged, after receiving a National Security Letter, that compels them to remain silent, after turning over the reading lists of people who use the library? Perhaps The Sir Talks-A-Lot Prize will be awarded to our new president for repeatedly reminding us that there need not be a conflict between liberty and security.

Barack Obama was elected because he inspired trust and talked about justice; and he seemed organized for diplomacy rather than force when he was running for president. His manner was disarming; he had principles that were well received. And people were insisting on change and were anxious to oust the republicans.

But lately, folks who support Obama want his leadership to improve; they want him to do better at moving and articulating his policies. Where, for example, is his political argument being used to influence his own party? Obama's standoffish style of leadership and his courtesy to republicans who are obstructing everything just looks like weakness, and it hasn't resembled a cool strategy, or a strategy of any kind.

It's the stuff that dreams are made of.
Posted by Copeland at November 01, 2009 No comments: