IN REMEMBRANCE OF MARTIN LUTHER KING 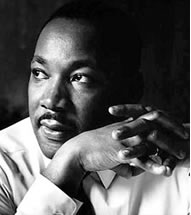 Now power properly understood is nothing but the ability to achieve purpose. It is the strength required to bring about social, political, and economic change.
What is needed is a realization that power without love is reckless and abusive, and love without power is sentimental and anemic. Power at its best is love implementing the demands of justice, and justice at its best is power correcting everything that stands against love.

Our country's leaders can no longer define the conditions that would bring peace; and they won't allow us to disengage from our foreign wars. At home, there is a reckless and persistent drumming up of violence by a right-wing that speaks in a way that suggests a right to nullify elections with guns. Death threats and vandalism at political headquarters, the brandishing of guns at public meetings, and rhetoric that assumes the elimination of political adversaries, is all a grim reminder of the sacrifices which were made in the past for a better world, when we mourned the assassination of our leaders.

"Power without love is reckless and abusive."

The assault of power, in the absence of love, can be seen in the manhandling and dehumanization of passengers boarding airplanes in this country. It can be seen in Afghanistan, as US Special Ops kidnap civilians in the middle of the night; and where occupation troops supervise the cutting down of orchards. It is the hellscape where robot drones appear out of the night to kill sleeping children. Because love lies abandoned, because this kind of power is reckless and abusive, the concept of peace and the blessings of peace are not even acknowledged by our politicians. And our silence, too, in the face of this kind of power, can rob us of our humanity.

"And love without power is sentimental and anemic."

Martin Luther King fell out of favor, after he spoke out against the War in Vietnam. People, even in his own civil rights organization, the NAACP, criticized him; this was because they could accept only the Reverend King of "The Dream" speech; and the Reverend King who rightly described his country as "the greatest purveyor of violence in the world" was out of step in their view; and suddenly he became an outcast in Washington, an object of suspicion to the Great Society democrats who once praised him. And how can we, or our president, bind up the nation's wounds, when love lacks power?--when political speech is composed of sentimental and anemic words?

Without justice and without laws in which we have confidence, we are lost. Bertolt Brecht, the poet and playwright, once wrote, "What times are these when a conversation about a tree is almost a crime because it contains so many silences about so many crimes?"  When will the president urge us to humility, as he gives his eulogy for American soldiers who commit suicide? Where are the words to bathe and anoint the body of the  next Afghan child,  killed by our bombs?