THE DISPOSITION TOWARD EVIL 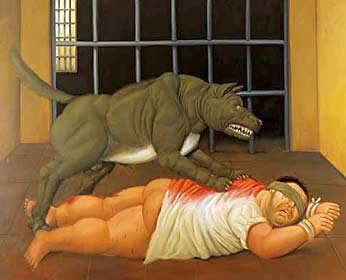 In the twentieth century, Dietrich Bonhoeffer, a Lutheran minister and author of an important work of philosophy raised again Aristotle's question of a disposition toward evil. It was not so much a single evil act that concerned Bonhoeffer, a German, as it was the disposition toward evil. His concern led him to leave a safe position in the United States and return to Germany to oppose Hitler. He was implicated in the plot to kill the Fuhrer, and Bonhoeffer was sent to prison and then to Flossenburg concentration camp. Shortly before the liberation of the camp he was stripped, marched through the corridors to the gallows, and hanged. His legacy is that an ordinary man, not a hero, may raise the hero's question about a government. Do the actions of the Bush Administration and its supporters in the Congress result from a disposition toward evil? And if that is not the disposition of all of them, it cannot be denied in the case of Cheney, Rumsfeld, Rove, Wolfowitz, and even Bush himself.

Historians are bound to look on early 21st Century America with a harsh eye.

Even Andrew Sullivan, a noted conservative writer and former supporter of the Bush/Cheney policies, is now disturbed that the administration has recycled many of the same techniques, and similar language used by the Nazis. Sullivan does not equate 1937 Germany with 2007 America, but does warn his readers of the administration's fondness for Gestapo technique.

The phrase "Verschärfte Vernehmung" is German for "enhanced interrogation". Other translations include "intensified interrogation" or "sharpened interrogation". It's a phrase that appears to have been concocted in 1937, to describe a form of torture that would leave no marks, and hence save the embarrassment pre-war Nazi officials were experiencing as their wounded torture victims ended up in court.

Also: the use of hypothermia, authorized by Bush and Rumsfeld, was initially forbidden. 'Waterboarding" was forbidden too, unlike that authorized by Bush. As time went on, historians have found that all the bureaucratic restrictions were eventually broken or abridged. Once you start torturing, it has a life of its own.

What I am reporting is a simple empirical fact: the interrogation methods approved and defended by this president are not new. Many have been used in the past. The very phrase used by the president to describe torture-that-isn't-somehow-torture - "enhanced interrogation techniques" - is a term originally coined by the Nazis. The techniques are indistinguishable.

The Republic that generations have passed down to us is in real danger; and what is required is for the new majority in Congress to do what voters have entrusted them to do. The public wants American troops to be withdrawn from Iraq. But Congress instead capitulated to the president; and the majority democrats removed the timelines for troop withdrawal, which they had previously touted and included in a bill they had presented a few weeks before.

On Memorial Day, Cindy Sheehan announced that she was physically, emotionally, and financially exhausted, and said that she had finished with the Camp Casey campaign and was returning home.

I have come to some heartbreaking conclusions this Memorial Day Morning. These are not spur of the moment reflections, but things I have been meditating on for about a year now. The conclusions that I have slowly and very reluctantly come to are very heartbreaking to me.

The first conclusion is that I was the darling of the so-called left as long as I limited my protests to George Bush and the Republican Party. Of course, I was slandered and libeled by the right as a "tool" of the Democratic Party. This label was to marginalize me and my message. How could a woman have an original thought, or be working outside of our "two-party" system?

However, when I started to hold the Democratic Party to the same standards that I held the Republican Party, support for my cause started to erode and the "left" started labeling me with the same slurs that the right used. I guess no one paid attention to me when I said that the issue of peace and people dying for no reason is not a matter of "right or left", but "right and wrong."

What was heartbreaking in her statement was her conclusion that her son Casey had died for nothing, and also her belief that she had failed him by her inability to carry on as she has.

The democrats in Congress cannot be forgiven for what they did, as they enabled the president's endless war. It doesn't matter whether you call them cowards or not. The so-called opposition party can no longer excuse themselves with promises to do the right thing next time. They have made that excuse one too many times.

Of what use are democrats in Congress if they won't stand their ground against an out-of-control president? One of the most banal excuses floated about, is the idea that these democrats were thrown into panic by the approach of the Memorial Day holiday. It is presumed that their guts surged with fright as they watched the latest glamor-packed Army recruitment ad on television, or when they heard the patriotic humming of Lockeed and Boeing commercials.

We should mark this down as complicity; and perhaps the democrats are not so much afraid as they are bound, deep down, to many of the same illusions and false duties that compel the republicans.

The disposition toward evil can express itself in the doing of evil, or in the enabling of those who do evil. This disposition can also manifest in the national myth, the collective illusions, the false mirror in which a nation sees itself.

Consider these cautionary words, written by Simone Weil during the Second World War: 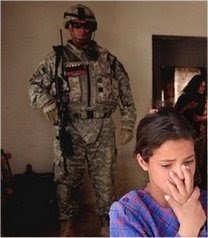 That which is essentially different from evil is virtue accompanied by a clear perception of the possibility of evil, and of evil appearing as something good. The presence of illusions which we have abandoned, but which are still present in the mind, is perhaps the criterion of truth.

An Associated Press article quotes former president, Jimmy Carter, who has broken from the tradition of ex-presidents withholding criticism of a sitting president. Carter, who aimed his harshest words at Bush's Iraq war policy, also condemned Prime Minister Tony Blair. In a BBC radio interview, Carter described "the almost undeviating support" of the President's British ally as "a major tragedy for the world". The former president had strong words to describe Blair's support of Bush: "Abominable. Loyal. Blind. Apparently subservient".

Carter emphasized that a break of political continuity basically separates the Current Occupant of the White House from past administrations:

The overt reversal of America's basic values as expressed by previous administrations, including George H. W. Bush and Ronald Reagan and Richard Nixon and others, has been the most disturbing to me.

We now have endorsed the concept of pre-emptive war where we go to war with another nation militarily, even though our own security is not directly threatened, if we want to change the regime there or if we fear that sometime in the future our security might be endangered...But that's been a radical departure from all previous administration policies.

Carter, who won a Nobel Peace Prize in 2002, criticized Bush for having "zero peace talks" in Israel. Carter also said the administration "abandoned or directly refuted" every negotiated nuclear arms agreement, as well as environmental efforts by other presidents.

"The policy from the White House has been to allocate funds to religious institutions, even those that channel those funds exclusively to their own particular group of believers in a particular religion," Carter said. "As a traditional Baptist, I've always believed in separation of church and state and honored that promise when I was president, and so have other presidents, I might say, except this one."

Though Jimmy Carter's declaration comes belatedly against the White House and its Current Occupant, it does dramatize the building political crisis. This decision can be seen as requiring courage, and has already put former President Carter and First Lady Rosalyn Carter at the receiving end of threats, coming from American right-wing extremists.

Jimmy Carter today chose to modify his previous commentary that appeared in an Arkansas newspaper. Carter did not retract any of his sharp attack on Prime Minister Blair, but revised his remarks with respect to Bush, saying he intended no personal sort of criticism of the president.

Following a White House denunciation of Carter's original remarks, the Democratic former leader said he had intended to describe Bush as the worst president since scandal-plagued Richard Nixon.

"My remarks were maybe careless or misinterpreted. But I wasn't comparing the overall administration and certainly not talking personally about any president," Carter told NBC.

"I have been very careful and still am not to criticize any president personally," he said, while restating his opposition to Bush's policies on Iraq and the Middle East.

In a weekend commentary published by the Arkansas Democrat-Gazette, Carter had written: "I think as far as the adverse impact on the nation around the world, this administration has been the worst in history."