U.S. AND NATO LEADERS KEEP TO THEIR SCHEDULE OF WAR AND DECEPTION 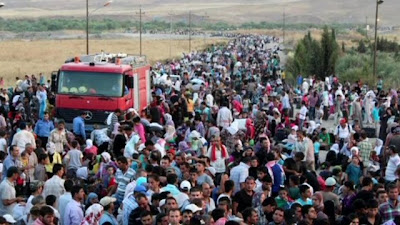 A world at war? A general war? The US and its NATO allies seem to be edging us all in that direction, against Syria (or even Russia), with the most perfidious abandon and deception, not seen since George W. Bush and Tony Blair led the United States and Britain into war, torture, and crimes against humanity in Iraq, in March 2003.

The scene above represents the flight into exile of a huge chunk of Kurdish society, who are fleeing into Iraq to escape murderous persecution, the killing and harassment by the Islamic extremists, those zealots called takfiri, who are the Syrian rebels. Besides fighting government soldiers, these rebels, who are mostly from outside the country, have been making life impossible for other religious believers who live in Syria. Whenever whole peoples are driven out on the roads like this, and have to run for their lives, it's undeniable that something horrible, something on a most frightening scale has been set in motion.

War by deception is the mark of President Obama. Only a few days ago his rhetoric was styled with an abundance of caution; and he was reckoning and reasoning that the situation in Syria was just too complicated, and that jumping rashly into military action had to be weighed against the constraints of international law. But a short time later he decides to hell with international law. Don't bother with the United Nations or the Security Council. Russia would certainly veto a sudden and ruthless attack on Syria's armed forces. And what is worse--and contrary to Obama's stipulation for cruise missiles--is the detailed case that Russia would make before the Security Council, with proof and argument, pointing to the Syrian rebels as the ones who are responsible for the chemical attacks, and the stacked corpses of Syrian children.

The rebels, many of whom are religiously intolerant, and not unlike al-Qaeda in most ways, are terrorizing and killing Christians and Shi'a Muslims. And the rebels are repeating this false flag tactic, this trick they tried before in Allepo. Moreover, the rebel fighters got caught doing this on a smaller scale, months ago. It was a chemical attack they did themselves, as provacateurs, and tried to blame the crime on President Assad's government. Their intent was the same; and their strategy was the same. And most telling is the matter of their timing; which is typically set to coincide with visits to Syria by UN officials.

The American president is not going to seek the advice or any vote of approval of Congress, before firing up this madness and mayhem. And only ten percent of Americans, as measured by poll, want an attack on Syria.

The Big Lie in the hands of any government is the most insidious betrayal of the trust that people place in their leaders. The Assad government would have absolutely zero incentive to do a chemical attack on civilians, only five kilometers from the center of Damascus, just at the time when a UN diplomat is in the city for talks with Assad's people. But the US government, with the British and French, are the ones that are the most invested in removing Assad from power. And the fact is, that a return to negotiations for a peaceful settlement, the future round of talks at Geneva, has been shaping up well for the current Syrian government, because the Army has been winning the war against the rebels for months. When events are seen in this light, the possible coordination of this gas attack between desperate rebels and the true belligerent-in-chief of the United States, does not seem so outlandish.

Make no mistake about this: the United States, aided and abetted by the purse strings of the Saudi king, assisted by Britain and France, is gathering a task force in Cyprus, a hundred miles from the Syrian coast, where it is evident that the decision to attack Syria has been made. Obama and his criminal partners have no interest in waiting for any kind of investigation of facts by the UN or anyone else. They are counting on the emotional onslaught of events, the images of the dead, gassed children, and the propaganda that assigns blame for their deaths. Behind the scenes, behind all the authoritarian manipulation and the cynical and farcical ballyhoo about their "responsibility to protect" there lies the same deranged calculations of dominance and the blood of another war.

Russian officials have come to regard American war policy as "a terrible rush to judgment."  The chair of the State Duma's international affairs committee, Alexi Pushkov,  voices the Russian sense of dismay at these preparations:

"To us, it looks as though [George W.] Bush, [Dick] Cheney and [Donald] Rumsfeld never left the White House," ..."It's basically the same policy, as if US leaders had learned nothing and forgotten nothing in the past decade. They want to topple foreign leaders they regard as adversaries, without even making the most basic calculations of the consequences. An intervention in Syria will only enlarge the area of instability in the Middle East and expand the scope of terrorist activity. I am at a complete loss to understand what the US thinks it is doing,"

THE ROAD TO WORLD WAR 3

UPDATE: I changed the link above from  the Leaked Documents story, to this one, because Stormclouds Gathering had concerns of authenticity about the leaked e-mails on which their story was based, and they pulled that video.

UPDATE II: Bernhard, host at Moon of Alabama, has a humorous and amazing story that concerns a dead man (former Defense Minister)  who has allegedly defected to the rebel side in the Syrian War.