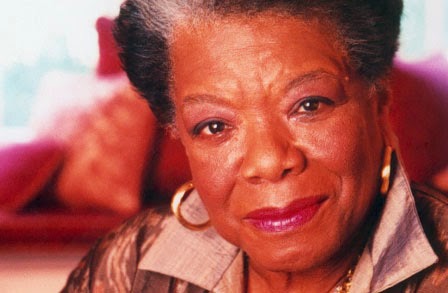 Angelou’s most famous work, I Know Why the Caged Bird Sings (1969), deals with her early years in Long Beach, St. Louis and Stamps, Arkansas, where she lived with her brother and paternal grandmother. In one of its most evocative (and controversial) moments, Angelou describes how she was first cuddled then raped by her mother's boyfriend when she was just seven years old. When the man was murdered by her uncles for his crime, Angelou felt responsible, and stopped talking. Angelou remained mute for five years, but developed a love for language. She read black authors like Langston Hughes, W. E. B. Du Bois, and Paul Lawrence Dunbar, as well as canonical works by William Shakespeare, Charles Dickens, and Edgar Allan Poe. When Angelou was twelve and a half, Mrs. Flowers, an educated black woman, finally got her to speak again. Mrs. Flowers, as Angelou recalled in her children’s book Mrs. Flowers: A Moment of Friendship (1986), emphasized the importance of the spoken word, explained the nature of and importance of education, and instilled in her a love of poetry. Angelou graduated at the top of her eighth-grade class.

I once saw Maya Angelou on stage, where she was giving a lecture on poetry and retelling her life experience. She was a fascinating and beautiful person, a unique American poet, linguist, a gifted raconteur, and had a remarkable knowledge and appreciation of history. Her presence before us was quite powerful; and her soul seemed to embrace the whole audience. It is a cherished memory for me.
Posted by Copeland at May 31, 2014 No comments: