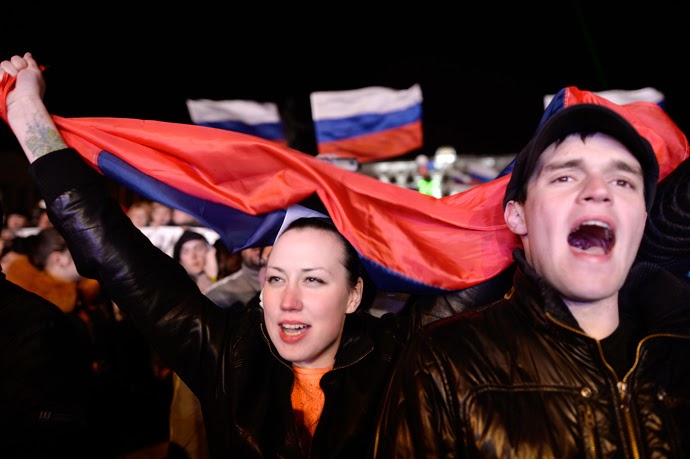 People sing the Russian national anthem as they celebrate in Simferopol's Lenin Square on March 16, 2014 after exit polls showed that about 95.5 percent of voters in Ukraine's Crimea region supported union with Russia (AFP Photo / Dimitar Dilkoff)


The celebrations were widespread throughout the Crimea today; and despite the claims by nations in Europe, backed  with the threat of consequences to Russia by the US, their spirits were not dampened. They voted for association with the Russian Federation. Those in favor numbered around 93%.

The White House is  scowling today, declaring that a principle of self-determination which is set down in the United Nations Charter should be ignored; and that instead, we are to respect a rump, illegal clique of fascists, who overthrew a legitimate, elected government, in Kiev. But it is madness to satisfy the greedy ends of a small collection of neocons and central bankers. These seem to be the people who are using the military muscle of the US , and presidents, who are nothing but hollow creatures, who will willingly murder anyone and overturn any society, if there is a profit down line for this morally decrepit Empire.

This recent crisis which forced Russia into a defensive position, next to its coastline, and its primary naval defense installation, in the Crimea, is something that concerns the essential Borderland, in Ukraine, that reaches back to the foundational beginnings of Russia, deep into its history. But our public has been told lies about this crisis. Those lies have been told and repeated in almost every major US and European news media. They will tell the people that the coup is not crawling with fascists at all. They don't tell the people about the horrific fascist sympathies embedded in the World War II history of the region of Western Ukraine. American audiences didn't get to hear about how, during the recent coup d'etat,  the sniper shootings of both police and protesters, turned out to be the work of the same snipers.

President Obama, Secretary of State John Kerry, and all the pusillanimous  leaders of the Empire's vassal states, will tell you with one voice, that it's only the Ukrainian Constitution that matters now, without mentioning how those fascist freaks of the Right Sektor and the Svoboda have crashed the party. The United States can now apparently void diplomatic agreements within days after the paper is signed. The February 21st agreement, said that the Ukrainian president would remain in office for an interim period, as those from the Maiden Protest and the opposition were eased into a power-sharing arrangements, pending a scheduled election. All the parties to this document were responsible for its implementation.

But what happened? Ukraine's president had to run for his life, people just came into Parliament, tossing the regulars out of their seats; and in an undignified haste they didn't even follow constitutional procedures for impeachment. When Russia asked the US about its responsibility for seeing that the party in power live up to the agreement, whose ink was still virtually drying, the US position was, "different facts now on the ground, forget it".

One astonishing fact after another came to light. Victoria Nuland (who is married to a bona fide PNAC neocon) and who is, herself, Assistant Secretary of State for Europe, has admitted  that $5 billion from our US Government had been the seed money for this "revolution".

But there will be no consequences for Russia that will not also land heavily on the backs of Americans and Europeans. And this has been the most desperate overreach and the most wicked foreign policy initiative thus far, by the Obama Administration, one which might have led to the mutual destruction we have always feared, if it had been further bungled.

So all hail the Constitution of a country, the poor Ukraine, whose broken legitimate government, the United States had a big hand in breaking. This is not the first country that has been broken and brought to despotism, chaos, or ruin, by the CIA and those fraudulent NGOs who provide cover for acts of subversion. Nothing Obama or Kerry has done has been for the benefit of Ukraine's people. And people in the US are beginning to wise up. They are not interested in this kind of absurdity any more. All of us who understand are beginning to hate all this hollow military posturing, this repulsive war making, which is ever advanced by the deception of our corrupt President and Secretary of State.

Hooray for the people of the Crimea today! At least they have the freedom of the ballot box, and can decide and celebrate their choice, one at which they have freely arrived.