"DON'T BEND YOUR HEAD DOWN...THE ONLY WAY IS RESISTANCE" 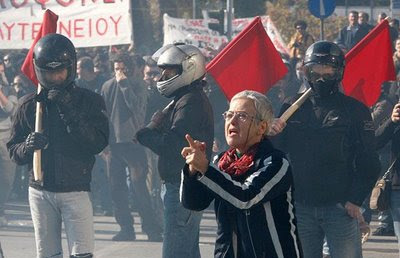 Woman in front of Greek Parliament, in protest, shouts at riot police.

The killing of a 15 year old boy, Andreas Alexis Grigoropolous, by an auxiliary policeman, put the match to a fire of uprising that has spread all across Greece. We don't know whether these unleashed furies will lead to a full insurrection that changes the political landscape fundamentally, or if there will be a repressive backlash, or if the right-center government of Prime Minister Karamanlis will fall, or resign, prompting new elections. But a poll taken in the shadow of this violence shows that the vast majority of Greeks believe this revolt has broad support and is not merely a rebellion of a fringe element. There is a long standing animosity not only against police brutality, but against the collusion of the two major political parties, where crimes committed by those in uniform ultimately go unpunished.

The revolt also seems to address the ruinous impact of privatization upon education, and a dearth of employment for 25% of young people, after they leave school and try to find jobs in their own country. There is also the situation, familiar to us in America, of a government whose agencies have so withered from corruption, that there is little evidence of governing at all, while the enrichment of the rich drives the middle class to a state of desperation. The ravages of class war can no longer be ignored as these kids watch the lives of their parents reduced by debts and overwork. "Graft, of course, goes hand in hand with incompetence," as Maria Margaronis writes, in The Guardian. The uprising has been identified as a burden carried mostly by the very young, who have occupied hundreds of schools in protest throughout the country, and come out bravely into the streets.

It is a revolt of schoolchildren and students, most on the street for the first time. There are reports of children as young as 12 battling riot police, shouting "Cops! Pigs! Murderers!"

The teenagers and twenty-somethings who have come close to toppling the Greek government are not the marginalized; this is no replay of the riots that convulsed Paris in 2005. Many are the sons and daughters of the middle classes, shocked at the killing of one of their own, disgusted with the government's incompetence and corruption, enraged by the broken promises of the education system, scared at the prospect of having to work harder than their exhausted parents. [...]

Police violence is not new, it is just that previous victims have been immigrants or Roma and so do not make the media. As usual when there is social dislocation, the far right has gained strength: the populist Orthodox Rally won 10 seats in parliament for the first time last year, and the neo-fascist Golden Dawn organization is known to have supporters inside the police. Now that the lid has blown off the pressure cooker, repression may take more blatant and more violent forms. 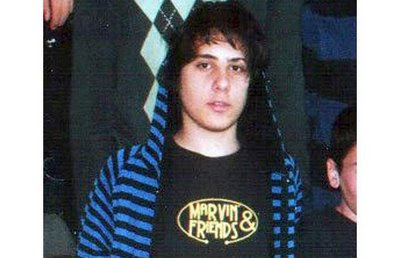 On the walls in front of the Greek Parliament, there is graffiti that reads "Alexis, these nights are for you." Throughout the country there is a revolt against the very alienation that the corruption of government has made possible. There is revulsion not merely at police excesses, but at the toleration of those excesses, that reach the highest offices. What the world witnesses in Greece is cause for wonderment, just as Greeks have been a cause of wonderment in times past; and today the coming together of people in the streets, both young and old, reveals much about human solidarity, and a democracy that is still capable of vitality and honesty at the grassroots. People from all walks of life are willing to meet face to face, students and teachers, trade unionists and ordinary laborers, professionals, artisans, and even some from the privileged class. And like Greeks from all times, they have a built-in suspicion of authority.

For example, Indymedia has reported a statement of protesting citizens, who briefly took control at a TV station:

Our action is a response to the accumulated pressures that ravage our lives, and not simply an emotional outburst in the wake of the murder of Alexandros Grigoropoulos by the Greek police.

We are yet another spontaneous collective that forms part of the social uprising in progress.

In a symbolic move to prevent the media from subduing us, citizens & civilians, we interrupt the newscast of the Hellenic Broadcasting Corporation (NET). We believe that the media systematically cultivates a climate of fear, promoting misinformation as information, and portraying a multi-faceted uprising as an outburst of reckless violence.

The explosion of civil unrest is explained in criminal rather than political terms. Crucial events are selectively brushed under the carpet. The uprising is served up as entertainment, something to watch until the next soap opera comes on. The media are being used as a means of suppressing free and original thought on a daily basis.

Let us organise ourselves. No authority can provide solutions to our problems. We must rally together and turn our public spaces – streets, squares, parks, and schools – into areas of unhindered expression and communication. Let us come together, face to face, side by side, to formulate our cause and our course of action as one.

Let us overcome the fear, switch off our television sets, come out of our houses, continue to assert our rights, and take our lives into our own hands.

We condemn police violence and call for the immediate release of all protesters held in custody.

We stand for emancipation, human dignity, and freedom. 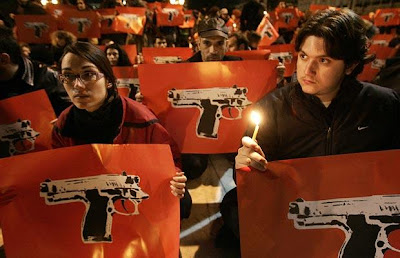 GAS DRILLING NOT A GAS

When I was growing up in Odessa, Texas in the 1950s, I remember with no particular fondness the considerable oil and gas drilling going on in the Permian Basin. Big oil literally transformed the economies and populations of my town and neighboring Midland 20 miles to the east. Business catered to it. Drillers and suppliers reeked of the smell of it. And the locals tolerated the changes it produced.

But some of us remember that where oil was being drilled gas was being burned off. For years in fact gas burning in West Texas sent up pinnacles of smoke and fire that nightly lit up the landscape of those high plains. Seen from long distances, onlookers over time grew somewhat accustomed to these fiery spectacles among scores of unsightly wells. But to astute observers in the ‘50s and ‘60s, closer inspections of these towering infernos would have portended catastrophic reckonings for peoples caught up in the explosive growth of intractable global societies.

Some 30 years later in the heart of Guadalajara, Mexico’s downtown district, ten massive gas explosions occurred over a two hour period due to gas leaking in the sewer system. Measuring 7.0 on the Richter scale, the explosive quakes damaged and destroyed over 1,000 buildings and created an enormous nine mile ditch down the middle of a major thoroughfare that measured 80 feet wide and 25 feet deep. The blast killed 200 people, injured 2,000 local inhabitants and left 20,000 homeless. Buildings suffered over $300 million in damages. The suffering of the people could not be measured.

Gas is volatile, inflammable, explosive. The production, transport and storage of this diminishing resource in spite of due diligence destroy property and lives due to inevitable accidents. In the drilling process, hazardous chemicals are injected into the ground. Radioactive materials, arsenic and hydrogen sulfide in the ground are disturbed. These and other toxic substances contaminate the ground and the air, gradually poisoning the environment and the people. But should any gaseous substances be ignited as demonstrated in Guadalajara, the consequences will be felt in less than a heartbeat.

While my childhood was giving way to adolescence in West Texas, my grandparents, Joe and Mary Clarke, were leading lives as prominent citizens in Fort Worth. He was the executive vice-president of the Fort Worth National Bank and she was a noted historian and author. The two of them cared about the welfare of the city, belonged to influential organizations, received favorable publicity, and in general supported causes that were fair and open-handed. They resided near Texas Christian University in an unpretentious home made beautiful by their patient and loving care.

Joe and Mary possessed an integrity that tolerated no deception or manipulation. Generous with their time and resources, they were blessed by their inherent goodness. Rather than being somehow compromised for their generosity, they prospered. They appeared to understand that deprivation in the end is the consequence of coveting.

Exceptionally well-liked and respected in the community, they would have been horrified to learn that gas drilling was being contemplated in some 15 neighborhoods in their beloved city. They would have unhesitatingly considered the consequences to public health and safety as eclipsing any benefits to the city from the discovery of gas or the enrichment of coffers. So like me they would never have compromised human security for a fickle prosperity.

-Barron Harper is a U.S. international tax advisor residing in France.
Posted by Grayson at December 08, 2008 No comments: