A Simple Twist of Fate

Well, here we are in the greatest country in the world. The snow has melted off and the mobs are massing to watch the gladiators have a go at each other. Tickets (in case you're interested) are going for between $3,500 and $20.000. If you don't mind watching it on a big screen outside the Coliseum--er--stadium, last I heard, the price was $200. Probably much higher today. On Super-Bowl Sunday, a thirty-second TV ad is running somewhere in the neighborhood of $3-million.

Meanwhile, half-way around the world, in Cairo, in Alexandria, a different hoard of folks are gathered together. Not just in Egypt, but other places, as well--in Jordan, Tunesia, Syria, Yemen, Sudan. Throngs of people lifting their voices for democracy, crying out to be treated with simple human dignity. The notion of shelling out $3,000 to watch a football game, or even $200 to watch it on a screen, probably would not occur to most of them as an option, not only because probably not one of them has anything close to that kind of money to waste, and perhaps never will, and not only because their reason for coming together could mean life or death, but because of the sheer absurdity of it.

So far, the football fanatics have had to endure snow and icy weather. Pat-downs at the airport. A slab of ice slid off the domed roof of the stadium yesterday and sent someone to the hospital.

And still they come.

Over eleven days, the Egyptians in Tahrir Square have fought off Mubarak's thugs, they've had rocks thrown at them, they've been gunned down in the streets. They've stood up to the lies told about them, by those labeling them as Islamic extremists, by those who say they're being influenced by "outside agitators," by those like Senator John McCain, who brands what's happening in Egypt as a "virus that must be contained." The police have attacked them, the army has threatened them, has made every attempt to shut down the flow of information, including removing news journalists from the streets, taking them who knows where. The army has cut off their food and water supplies.

And still they come.

I wonder how many of them, along with their children, could be fed on all that Super-Bowl money--ad money, football money, money spent on bets on the game, money spent on airline tickets, gasoline, hotels, parties, fine dining, booze, and whores.

How many in my home town could be fed on that money? In my county alone, a fifth of children under the age of 18 live in extreme poverty. In my state, Texas, a quarter of them suffer from food insecurity or outright hunger.

The U.S. President, Barack Obama, and Secretary of State, Hillary Clinton, have told the Egyptians they support them in their cause. Of course, they believe in democracy and human rights. They said they want a peaceful, orderly transition from Hosni Mubarak to the newly selected--not elected--Vice President--Omar Suleiman. Suleiman, the former head of Egyptian Intelligence, the C.I.A.'s point-man in Egypt for renditions and torture.

The President said he would journey to Texas if his beloved team, the Bears, were in the running. But they didn't make it. So today he will be hunkered down in the White House watching the Super Bowl. His guests include entertainers--Jennifer Lopez and Marc Anthony. He did not say he would journey to Cairo to stand in solidarity with a people who have endured thirty years of life under a brutal dictator.
Posted by Grayson at February 06, 2011 No comments:

MUBARAK SOMEHOW MISTAKES HIMSELF FOR THE HOMELAND 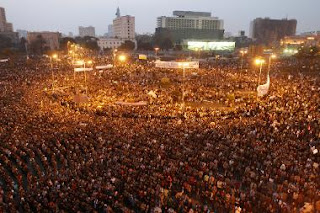 "When a regime withdraws the police entirely from the streets of Cairo, when thugs are part of the secret police, trying to give the impression that without Mubarak the country will go into chaos, this is a criminal act. Somebody has to be accountable. And now, as you can hear in the streets, people are not saying Mubarak should go, they are now saying he should be put on trial. If he wants to save his skin, he better leave." –-Mohamad ElBaradei

Hosni Mubarak's ominous comment "...the Homeland goes on but the people do not...", in the midst of a speech where ordinary Egyptians were expecting (at least hoping) for him to announce his resignation, served as quite an eye-opener. The immense crowd in Cairo, roared back as they listened to him explain why he is still indispensable until September; and while they massed in the early morning darkness, their shout was for him to just "Leave".

Mubarak's hated police and his more hated Ministry of Interior, have made people recoil in fear for a long time; but the people began shouting back in unison that they would no longer be objects of abuse. When it becomes customary for police to beat or torture people taken into custody, when the face of a policeman on the street becomes that of a snarling bully who manhandles citizens at his whim, it means that civil society is broken.

What is terrifying is that a nation of over 80 million was placed for so long at the mercy of 1.2 million goons, their hirelings, and accomplices. Bernhard, who hosts at Moon of Alabama, describes this problem:


What to do about the 1.2 million people who work for the Interior Ministery and suppressed the people and protected the regime? Leaving them without income is dangerous, keeping them impossible. The economy is in bad shape - a social-democratic middle ground needs to be found to heal it while also lifting the poor from their mess. It will take years.

The US administration, as Hosni Mubarak's not-so-secret benefactor, embarrassed and contradicted itself at every turn. Vice-President Biden, like a stooge in an expensive suit, maintained that Mubarak is not a dictator. Old Hosni was a dear and reliable ally, serving at the pleasure of officials in Washington, as reputable as the derelict American press could arrange for him to be, lionizing him as a stabilizing presence in the region. Mubarak's counterfeit democracy and brutal repression were skimmed over in US newsrooms; and with press releases in their sweaty hands, the scribes hunched over the sacred writ from today's White House salespeople, acting submissively, just as they had done during Bush's years.

In the United States and Israel, the usual suspects persist in adding disinformation to the news; accusing protesters, labeling them, pointing at them, as looters and rioters. The protesters have been militant and defended themselves, but their behavior has been remarkably good in their large numbers, in these circumstances. Their anger at the Mubarak regime is justified. The real looters have been professional; sometimes shot by soldiers, and sent to hospitals, where they were found with police identity cards. This is the practice used by corrupt governments; they foment chaos themselves; they order it done to bring discredit to those who are protesting in the streets, and to prey on the fears of society at large, with the idea that the authorities alone can fend off social collapse.

President Obama and Secretary Clinton have been tangled up for days in the hypocrisy of their country's insipid diplomatic language. But the real heroism and social responsibility applies to masses of Egyptian people, who have taken steps to heal an abused nation; it is a profound contrast to the world of make-believe, which our president tried to sell to us, in his latest State of the Union speech. The contrivance and junk rhetoric has just worn out its welcome: the stupid recycling of the "Sputnik moment" from a Cold War mentality, morphing into an economic vision of green energy renewal; but for an empire in decline, which can't manage infrastructure or maintain decent wages at home, the US Empire can still build schools and pulverize villages in Afghanistan. And Obama capped all this off by wearing out the phrase, "winning the future".

Isn't the cry about winning the future just a handy strategy to keep an old exhausted mule tugging at its harness? Winning the future, as rhetoric, is like the long pole with a carrot at the end of it; just enough incentive for a mule.

While Obama points to a worthy citizen in the gallery, and bathes in that person's reflected glory, while he gesticulates and prattles about winning the future, ordinary Egyptians have done something that should humble him, and all the rest of us. Unlike Americans, Egyptians seem to be mastering their fears; and if they can continue this way they will be thinking more clearly. But there is no going back; and it's best to wish them well. They refuse to be coerced any longer by Mubarak's brutality or ever bow down before his brutality again. Once the people take a step like that, they have proven how great they are.


Image: Cairo's Tahrir Square (via Moon Of Alabama)
Posted by Copeland at February 02, 2011 No comments: