Honey bees are disappearing. Nobody seems to know why. Perhaps another casualty of pollution and global warming. With the latest gloomy report of environmental scientists, it appears we humans are short-listed for extinction on our doomed planet along with polar bears, whales and the already vanquished do-do bird.

No doubt the first to go will be those who will be unable to afford to get to higher ground or pay what is certain to be a very high premium to live there. In other words, they will look a lot like the thousands left behind after Hurricane Katrina. Only, this time, they will number in the millions.

Already we're finding out who can or cannot afford the basic necessities, not just food and running water, but heat in winter. Forget health care. Here in Texas, the rich oil man, T. Boone Pickens, is buying up acreage overlying the Ogallala aquifer. Basically, he plans to drain the aquifer needed by West Texas farmers and sell off the water at colossal profits. This will be the sunset of our brief sojourn here. The rich will continue to plunder and profiteer off the rest of us right up to the end—at which point, I suppose, there will be nobody left but them, clutching their purses as they breathe their last in a world that will barely sustain them or their spoiled offspring.

For the present, we are locked in mortal combat over the earth's dwindling oil reserves, all under the guise of making the world “safe for Democracy.” And millionaires. The proposed new oil law cooked up between the U.S. and the Iraqi government leaves no doubt what the real objective was for the Iraq War. Under the new law, Iraq's oil will be handed over to foreign oil corporations, such as Exxon-Mobil, Shell and British Petroleum.

Well, if you can't win the war on the ground, at least you can win it on paper. The new definition of Democracy.

Not all that new, I suppose. From the Mexican War to the present day, Americans have always had a soft spot for bringing freedom and religion to backward people neatly packaged in the latest generation of exploding devices.

And make no mistake. Merely because folks are momentarily disheartened by the present disaster in Iraq should in no way be interpreted to mean they are tired of war, only that they are tired of losing. Give them a new one, such as Iran—looking more imminent by the hour—and once again their optimism will soar.

You would think the announcement of the world's leading scientists that global warming is well-nigh irreversible would render absurd all wars or even the thought of war. Yet, the best thinking of our leaders is not to halt the one in Iraq, but to expand it. And to move aircraft carriers into the Persian Gulf, poised to heap destruction on Iran.

And while bullying other countries (puny enough to be bullied) to divest themselves of their nuclear weapons, we are working night and day on a whole new generation of WMDs for ourselves. To what end? To gain dominion over a world that may not be able to support human life another hundred years? To hand the spoils over to the likes of Halliburton, Exxon-Mobil and WalMart?

The sad history of our last stand on the planet will not be any noble effort to join hands with our brothers and sisters around the globe to try to halt what is happening to our beleaguered planet, but instead to bring more destruction, more bloodshed, more misery, as we continue our campaign to grab all that remains of the oil, the gas, the gold, the precious minerals, the jewels, the dinars, the shekels, and finally, inevitably, the water, for ourselves.

Our end, I imagine, will not be unlike the end of that great book by William Golding that I read long ago as a freshman in college, Lord Of The Flies. The adults finally arrive to rescue the children who have been stranded on an island after a plane crash, only to find a rabble of half-naked and painted savages, stalking each other with sharpened sticks. In a final touch of irony, the adult leading the rescue party is decked out in a crisp white naval uniform with brass buttons and epaulets. Now, the question is who will rescue him?

As for those honey bees, once they're gone, I reckon we'll have no more flowers. Which suggests a new line for Pete Seeger's famous song. Well, you'll still be able to get plastic ones—all you want. We'll need oil to make them with, of course. Ah, thus may our wars acquire a whole new relevance—not only to quench the voracious thirst of our cars, but also to maintain a steady crop of flowers—albeit plastic ones—for soldiers' graves.

--Published in the current online issue (Feb. 26) of The Lonestar Iconoclast.

"TELL ME,...WHERE DO YOU WANT THIS KILLING DONE?" 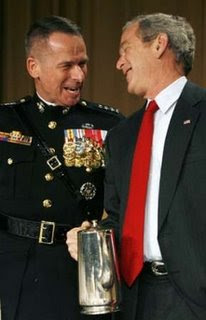 "...generally accepted in Christianity [is that] all mankind is tainted by the sin of Adam...and in all of us there is a disposition to the evil character responsible for that terrible deed. But in all of us, besides the inclination to revolt against the deity...is something of that exaggerated pride and hypertrophic vanity that makes us think of ourselves as godlike."

"Brushing away all religious veneer and looking at the question from the viewpoint of sober scientific research, is there, in reality, in all human beings a kind of innate overconfidence in their own powers?"

"It is very likely, however, that the assumption of such a general disposition does not regard actions, but rather activity in thoughts: in other words, overevaluation of mental activities, fantasies, wishes."

"Psychoanalysis asserts that children have really a grandiose concept of the power of their own thoughts and learn only late to acknowledge the limitations set to their daydreams and wishes. A small boy or a small girl will at first believe that he or she can grasp the moon looking into the nursery. Such extraordinary belief in one's own mental processes is often unconsciously maintained and kept in spite of opposite rational views."

"In psychoanalysis of neurotic patients, especially in obsessive cases, we regularly encounter manifestations of that old belief in the omnipotence of their thoughts." --Theodor Reik, MYTH AND GUILT, p. 413-14

On the other hand, as Dr. Reik points out, the neurotic who successfully resists temptation is still quite harsh on himself, because the moderator of conscience (his superego) "treats certain wishes as though they were real transgressions." Neurosis is a common enough feature, and the conclusion about guilt. that Reik arrives at, is that it is grounded in aggression, often aimed at a loved one, which conscience forbids the person to even think about. This inner conflict cannot be expressly resolved.

"The tension between the strict superego and the subordinate ego is called "sense of guilt"...and it manifests itself as a need for punishment".

This goes back to the most fundamental moral affect, which we encounter as children. And Dr. Reik identifies the genesis of guilt as directly connected to the dread of losing love. "A bad deed precipitates discovery of the misdeed which precipitates loss of love (and protection) for the child."

We have to be worried about our President, George W. Bush, because he shows very little sign of this moral grounding. "The guilt feelings of mankind have their root in aggression and violence"; but there is extreme danger arising in the rare man who operates without any sense of guilt. Will America lead the world toward total war, at the bidding of such a man? This curious President who has so often clowned and mugged for the cameras, is one who has always been more dangerous than he appears to be on the surface.

H.L. Mencken's admonishment that "Conscience is the inner voice that warns us somebody may be looking" does not seem to be working in the case of President Bush. The whole world is looking at the President's prevarications as he makes his preparations for an attack on Iran.

Our desperate hope is that Congress will act in time to prevent the escalation against Iran that Bush seems determined to mount. As US Occupation forces pass through Iraq's shattered communities, this war may spread further, with apocalyptic violence, as it swirls on, and burns through Iran and Afghanistan.

President Bush seems to think that America should sow the wind and reap the whirlwind. He may think he has been given the access code to the nation's messianic buttons. He may think that God has chosen him to activate the Book of Revelations. But the President can no longer coax the public into seeing him as some poor neurotic (like them), obsessed with his past failures, and driven to prove himself as his father's equal. The reality is much more sinister. There is no moral agent in this man, no conscience, nothing to curb ambition or deter omnipotent moods.

Chris Hedges has warned us about the Christian Right and its seductive vision of absolutism and apocalyptic violence, in his new book called American Fascists.

"The ecstatic belief in the cleansing power of apocalyptic violence does not recognize the right of the victims to self-preservation or self-defense. It does not admit them into a moral universe where they can have a criminal's right to be punished and rehabilitated. They are seen instead through this poisonous lens as pollutants, viruses, mutations that must be eradicated to halt further infection and degeneration within society and usher in utopia. This sacred violence--whether it arises from the Bible, Serbian nationalism, the dream of a classless society, or the goal of a world where all "subhumans" are eradicated--allows its perpetrators and henchmen to avoid moral responsibility for their crimes. The brutality they carry out is sanctified, an expression of not human volition but divine wrath. The victims, in a final irony, are considered responsible for their suffering and destruction."

"Societies that embrace apocalyptic visions and seek through sacred violence to implement them commit collective suicide." 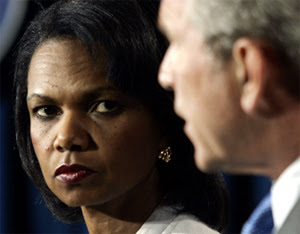 The endgame is already set in motion.
Posted by Copeland at February 10, 2007 No comments: