WHAT IS THE MEANING OF TERROR?


"They didn't know what America was, before drones."

A US president's primal obsession with military violence may soon be pursued with machines  which operate under autonomous programming, with detachment; and divorced from war and its horror completely, the circuitry will at last  be king, having taken over the scene of war crimes. And yet as far as the cold intelligences that authorize, and maintain, and program these appliances of murder are concerned, the meaning of terror has crossed into the domain of science fiction nightmare.

There are apparently some planners at the Pentagon who foresee this as an improvement over the remotely piloted drone bombers they have now.

Let me digress for a moment to explain or elaborate a little scene I witnessed while riding the bus home yesterday.  The driver was pulling out of the downtown station, and stopped at a little open air concession, at the curb that comes just before the bus would merge into traffic. The door opened at the vehicle's front, and the driver wanted a snack, some chips for the road.  This admittedly held up the progress of every bus behind us for a minute or two; and there was some peckish tooting of horns, little toots. Now it would be easy to imagine station supervisors barking orders to keep to schedule, or a policeman coming to unblock the snarl. Yet who should appear, instead, but a couple of Homeland Security uniforms?

This is a very odd example of the new and deformed chain of authority in our country. At least one of the two men was livid; and he was trying without success to flag down the bus. But speeding away, the driver just hollered back: "I don't know who you are!" Well this response is not surprising, since these agents of federal authority don't have real looking badges, but a kind of pseudo badge, that is not even a patch, but is printed on, like the transfer on a t-shirt. And worse, it appears rather crudely drawn, the way monopoly money is. Yet even a burlesque like this is preferable to some cyborg machine, in whose computer chips all options are on the table.

We are not being bombed by our own drones as of yet; but the militarization of our police is leading to the normalization and introduction of these machines in the States. In the far outback of Waziristan, segregated from Pakistan's influence, how could they know what America was, before drones?

The fantastic four-legged war machines, that most of us saw in the Star Wars trilogy, are being introduced in the real world, as prototypes: machines that lumber along and gallop with the gait of familiar animals. We are beyond the Twilight Zone now, outpacing the dystopias of George Orwell and Aldous Huxley.

Coming back to my story, I recall a strong premonition that the bus would soon be halted by some means, as we were departing the station. And sure enough, it hadn't gone two blocks before the driver was called on the phone. Lifting up the clunky, huge handset, as big as those on our landlines of 40 years ago, our driver idled there for ten minutes at the light, showing visible distress, as she was being chewed out for disrespecting the Black Shirts. It was several stops later before her emotions could be put into words:

"They ain't nothing. It don't bother me unless they come after my kids." 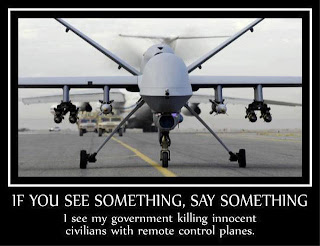