The current argument between Mr. Obama and Mr. Romney over Rom/ObamaCare is nothing but a smoke-screen, a fog that, unfortunately for the country, avoids what should be the real discussion: what a boondoggle this healthcare bill will be for the insurance companies, when the only thing that makes sound economic sense is Medicare for all. The President knows this, of course, even if Romney doesn't. But by targeting his opponent as the original champion for this fraudulent law, the President is merely pointing out how thin the difference really is between these two corporate shills now competing for the title of White House Occupant.
Posted by Grayson at April 12, 2012 No comments:

IN WASHINGTON, CHRIS HEDGES URGES NON-VIOLENCE FOR OWS MOVEMENT, AND IS CRITICAL OF BLACK BLOC HOOLIGANS


FRIENDS OF THIS BLOG SHOULD RECOGNIZE OUR OWN GRAYSON HARPER
THERE IN THE AUDIENCE.
Posted by Copeland at April 08, 2012

THE WORLD ACCORDING TO DECREE

"There is no terrorism like state terrorism." --Arundhati Roy


"...The United States government is now structured so that, like an automobile needing gasoline, it needs war in order to function, in order to operate and be fueled. It's really, I think, best thought of as this insatiable beast, that needs as its primary nourishment, continuous war." -- Glenn Greenwald, Boardman Lecture (22 March) (my bold)

We have come further along now to the demise of democracy, with the gradual erasure of constitutional rights, rubbing out one piece and then another; while a charismatic African-American president just adds further irony to the loss.  He alone is not responsible; but is assisted by his own party; and also prevails with a nod from his republican adversaries in Congress. We wanted to turn to someone like Obama, in 2008, who spoke of law and respect for our rights under the Constitution; but whatever we might have expected of him, he didn't really curb state terror and lawlessness.

In his speech of last month, Greenwald starts with some fundamental ideas from military historian, Andrew Bacevich: America is currently in a state of endless war. And war is no longer one of the  practical instruments of foreign policy;--nor is it a means by which the policy is pursued,--so much as it has become "a foreign policy goal unto itself."

And Greenwald warns us that Obama has taken the abuse of power further than Bush dared:

The most tyrannical power that any government can possibly assert, which is the power to target its own citizens for execution far from any battlefield, without a shred of due process or transparency;--that's a power that the Obama administration has not only claimed for itself,--but now publicly justified, and in the case of Anwar al-Awlaki, exercised.

You cannot conceive of a more tyrannical power than the power to kill American citizens without due process.


But how can we be sure the persons (even US citizens) that the president wants to assassinate now without any due process at all, are really guilty? They haven't been afforded real trials. How do we know if those assassinated were really affiliated with al-Qaeda?--if they were involved with "associated forces"?--or with those "belligerent" to the US? They could have been framed by some malevolent faction in their country, or condemned by faulty intelligence.

Obama's Attorney General, Eric Holder, got especially squeamish when reporters repeated the term, "targeted assassination"; for as he sees it, a real distinction applies; and he went on to say that "targeted killing"was the right way to describe it. Nothing to worry about. Killing is normal  government business; assassination, on the other hand, would be illegal.

Aren't American values just a twisted mutation after all this? The Attorney General thinks that secret life-or-death deliberations over the fate of an accused citizen, and the subsequent decision to carry out execution, and soberly assassinate/kill the person, is quite the normal thing to do. Eric Holder goes on the record, to add that executive due process requires no component of judicial due process. However, the founders of this country wrote due process into the Constitution; and they wrote it with no uncertain words, to include judicial due process as part of the rights of the accused.

Obama has signed terrible bills into law, voicing only some anemic words of protest. The NDAA, for example, which allows for the military to arrest US civilians on the "Homeland Battlefield", if it comes to that: and this new power permits indefinite detention of American citizens, when the president has a mind to declare an emergency.

"Governments derive their just powers from the consent of the governed". Remember those words? 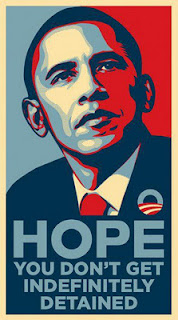 But to come back to the question of state terrorism,  John Pilger writes:

Remember the tear-stained headlines when Brand Obama was elected: "momentous, spine-tingling": the Guardian. "The American future," wrote Simon Schama, "is all vision, numinous, unformed, light-headed ..." The San Francisco Chronicle's columnist saw a spiritual "lightworker [who can] usher in a new way of being on the planet". Beyond the drivel, as the great whistleblower Daniel Ellsberg had predicted, a military coup was taking place in Washington, and Obama was their man. Having seduced the anti-war movement into virtual silence, he has given America's corrupt military officer class unprecedented powers of state and engagement.   [...]

On 5 January, in an extraordinary speech at the Pentagon, Obama said the military would not only be ready to "secure territory and populations" overseas but to fight in the "homeland" and provide "support to the civil authorities". In other words, US troops will be deployed on the streets of American cities when the inevitable civil unrest takes hold.

America is now a land of epidemic poverty and barbaric prisons: the consequence of a "market" extremism which, under Obama, has prompted the transfer of $14 trillion in public money to criminal enterprises in Wall Street. The victims are mostly young jobless, homeless, incarcerated African-Americans, betrayed by the first black president. The historic corollary of a perpetual war state, this is not fascism, not yet, but neither is it democracy in any recognisable form, regardless of the placebo politics that will consume the news until November.


The political class, riding on the inflatable US Empire, puffed up near to bursting, on petrodollars of uncertain worth, looks to be increasingly agnostic on the question of democracy. When their bosses (not us, but the 1%) demand their compliance, these politicos jump where they are told to jump. And it seems they are corrupt, operating with an indifference to human suffering, oriented in terms of the rewards they will reap for loyalty and their years of faithful service to the looters, embezzlers, and the officer class, and the defense lobby and war profiteers. When push comes to shove they are indifferent to democracy. The world according to decree is alright with them.

Dick Cheney's long-nurtured vision of the "Unitary Executive"is quite in style now in Obama's White House. Though this could be impeachable, or criminal on the face of it; the Defense Chief, Leon Panetta, nonetheless caused Senator Sessions some dismay, when the senator questioned him about where the administration would go, in order to find the legal basis for going to war. Panetta's evasive replies were aimed at avoiding the sticky issue--that is--the legal responsibility of the president to consult with Congress and obtain congressional approval, before going to war.


The aloof Defense Secretary was unconcerned about the senator's concerns, and less than concerned himself, about coming to Congress, in order to establish  a legal basis for going to war; although he took pains not to say so directly. The administration believes it has the authority, in and of itself, to decide which nation it attacks; and this is based on its conviction that it knows best how, and when to defend the United States. As far as the basis of legality was concerned, that would arise, Leon Panetta said, from the consensus of the "international community" or our NATO allies.

Senator Sessions might have been wondering if our president, a constitutional scholar, had known better than to ignore Congress when he ordered the bombing attacks on Libya--that went on for months--without ever bothering to establish a legal basis for war. But Sessions wasn't about to challenge the administration with that question.

Yes indeed, there's a beast already loose in this land. It extracts wealth and resources from people who can't defend themselves; and this same beast has been exporting misery and hideous violence to foreign lands for as long as any of us can remember. It runs on insatiable greed. It's been busy for decades with its obscene work: seeing to the dismantling of democracy, hammering on public education, corrupting information; and all the while pretending to make us safe. Hypnotizing us with its endless military bullshit. It's no problem for the beast to rummage through our computer disks, our financial and medical records; nothing to do but infiltrate our political life with spies and hostile agents who try to sabotage peaceful change.  Even the word, peace, has been evicted from our political vocabulary by this beast.

Speaking for the beast, Panetta's responses in the US Senate signaled the true apotheosis of imperial power;  and not just its supremacy, but what the word signifies, the real deification of this kind of power: murder premeditated in secret, and carried out by executive decree.