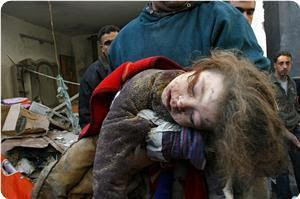 The carnage Israel is committing in Gaza is entering its third week. This is more of a mass murder than a war, with Palestinian deaths now numbering over 900. Israeli deaths will add up to only 15 or so as things stand now. What is happening is a disproportionate destruction of the weak by the strong. The Israeli Air Force is bombing what is essentially a vast ghetto of one-and-a-half million people. This ghetto is cut off from most outside aid, and has been under economic siege by Israel long before the present hostilities broke out.

American congressmen and US media giants are endlessly versatile when it comes to marketing a case for the Israelis, no matter what cruelty is visited on women and children in Gaza by the IDF. It appears as a novelty whenever any instance provides the Palestinian side of the story.

The Israeli blockade of the necessities of life, supplies they have held up and limited to an insufficient trickle of humanitarian goods, has choked life in Gaza, and made it impossible for the local generators to run, which provide water for a great many families. How often has it been reported that such a strangulation of humanitarian goods is itself an act of war against Gaza and its people?

And what is the sin that the Palestinians committed? Not the unguided rockets which one can say are insignificant compared to the US armaments that the Israelis are using on schools and ambulances, and on neighborhoods where they have wiped out whole families. No this is not a very credible pretext for Israel. The real offence for which the Palestinians are so harshly condemned to death, is that they refuse to renounce the Hamas government they themselves elected. This is what the Israeli leaders will not tolerate.

And then there is the cynical timing of this slaughter to consider. And the veto by the US ambassador to the UN, blocking a cease fire resolution. Here we are at a moment in the US where presidential power is about to be transferred to a new administration. The Bush administration in its last days in office is rushing sophisticated weapons to the leaders of Israel, bunker busting bombs supposedly meant to target Hamas fighters.

And very little light is shed in America upon the tactics Israel pursued against the lawful Hamas government, the habitual use of extrajudicial murder, in what are called its "targeted assassinations", orchestrated as a political front of war against Hamas leaders, the arrest and incarceration of parliamentarians and holders of executive office, or the real campaign of terror against municipal government, the murder of policemen and police cadets.

How should responsible people outside this tragedy react when they learn that half the population of Gaza are only children?

Under international law Israel bears the responsibility, enumerated in that body of law, since it is acknowledged to be an occupying power, with respect to the Palestinians. Under these laws occupiers are expected to behave as if they were the responsible grownups. This ongoing massacre in Gaza exposes the lie of all of Israel's professed humanitarian language and talk of self-defense. There is no self-defense that can be claimed by a powerful oppressing nation over subject peoples.

An article by Nir Rosen, Gaza: the logic of colonial power, exposes the hypocrisy under which the powerful get to name terrorists and define what constitutes terror:

I have often been asked by policy analysts, policy-makers and those stuck with implementing those policies for my advice on what I think America should do to promote peace or win hearts and minds in the Muslim world. It too often feels futile, because such a revolution in American policy would be required that only a true revolution in the American government could bring about the needed changes. An American journal once asked me to contribute an essay to a discussion on whether terrorism or attacks against civilians could ever be justified. My answer was that an American journal should not be asking whether attacks on civilians can ever be justified. This is a question for the weak, for the Native Americans in the past, for the Jews in Nazi Germany, for the Palestinians today, to ask themselves.

Terrorism is a normative term and not a descriptive concept. An empty word that means everything and nothing, it is used to describe what the Other does, not what we do. The powerful – whether Israel, America, Russia or China – will always describe their victims' struggle as terrorism, but the destruction of Chechnya, the ethnic cleansing of Palestine, the slow slaughter of the remaining Palestinians, the American occupation of Iraq and Afghanistan – with the tens of thousands of civilians it has killed … these will never earn the title of terrorism, though civilians were the target and terrorising them was the purpose. [...]

Normative rules are determined by power relations. Those with power determine what is legal and illegal. They besiege the weak in legal prohibitions to prevent the weak from resisting. For the weak to resist is illegal by definition. Concepts like terrorism are invented and used normatively as if a neutral court had produced them, instead of the oppressors. The danger in this excessive use of legality actually undermines legality, diminishing the credibility of international institutions such as the United Nations. It becomes apparent that the powerful, those who make the rules, insist on legality merely to preserve the power relations that serve them or to maintain their occupation and colonialism.

2009: A NEW YEAR LIKE THIS CALLS FOR DYLAN THOMAS