Yesterday numerous cops in heavy riot gear entered the University of Pittsburgh campus, after dark. RAW STORY, among others, has offered early reports on the heavy-handed dispersal of a peaceful protest at the university. What is clear from a host of video coverage is that the five-hundred students who were voicing their opposition, as well as passers-by and spectators, were dispersed by police in riot gear. Some were arrested, some tear gassed; and a few policemen pursued students into the foyers of their dorms.

The outdoor assembly was called to express solidarity with G-20 protesters in the city who were suffering rough treatment at the hands of police. Students reacted with disbelief to the police invasion, but did not panic, even while in a state of shock and dismay.

Accusations of anarchism were sometimes sent flying here and yonder, through the city of Pittsburgh and in mainstream media; but it is a stretch to call the G-20 protests themselves an example of anarchy. The massive looting of the US Treasury by engineered chaos of credit default swaps, overseen by the Federal Reserve, facilitated by lawmakers who abolished financial regulations, is most like anarchy; and the demonstrators who have had to wear protective clothing and helmets to lessen their chance of being seriously hurt by police, are not so much the anarchists. Besides, it is an ugly example of American journalism when pundits take the low road and describe these demonstrations in Pittsburgh as riots.

The police did proceed methodically on campus. Officers weren't out of control, for the most part; but to the astonishment of the students, the rough treatment, which resulted in bloodied heads and arrests, was completely uncalled for. The Pittsburgh Chief of Police issued a declaration that called the gathering an "unlawful assembly". Since when are peaceful demonstrations monitored by campus security overruled by city authorities?

But the atmosphere has changed during the past few years, over the rules regarding citizen rights to have peaceful demonstrations. So-called non-lethal riot projectiles, beanbags and rubber bullets are being used by cops; and hits to soft tissue, or the neck and head, sometimes result in death. It was recently revealed that the FBI wants to quadruple its electronic surveillance capacities; moreover, federalized police and a multitude of new police entities are infiltrating the most innocuous peace groups and fielding provocateurs to incite or even commit violent acts at demonstrations.

A fundamental danger to our liberties is growing in the enhanced police powers we are seeing; and these are especially visible in the increasingly harsh policing which arises more frequently, at a lower threshold of provocation. A more brutal array of crowd control weapons is also being readied to deal with unrest. The ear-splitting sonic weapon is already in use against crowds at the G-20 protests in Pittsburgh; meanwhile, some version of this device is being used by the Micheletti Junta in the Honduran capitol, targeting the Brazilian Embassy, where the ousted President Zelaya is staying under diplomatic protection, as the Golpistas with their armed goons are savaging the president's supporters on the other side of the gates.

It should be noted that right-wing "teabaggers" and the nitwits who travel (some with sidearms) to US Town Hall meetings on the insurance companies' dime--and others among them, who muscle their way into overcrowded venues and beat on the windows--miraculously don't get tear gassed or have police batons batter their skulls. You'll never see one of those ultra-conservatives taking a rubber bullet in the neck for the cause.

One of the Pittsburgh students is overheard asking a policeman about the rough stuff and the cop invasion of campus. Amid other public objections to the G-20's economic cabal, the bankers' bonanza, and the globalization agenda with its worst foot forward in Pittsburgh, students wanted to voice their objections, on their own campus, and let it be known that they didn't like the way police have been abusing demonstrators in the city. Well, on Friday night they had one hell of an object lesson, to the effect that if you protest against some things (and not others) the police in their heavy riot uniforms will give naysayers something to think about. A student is heard to ask why. He asks why and why again. But no answer was offered Friday night.


The beautiful Haris Alexiou
Posted by Copeland at September 22, 2009 No comments:

WILDFIRES BURN THEIR WAY TOWARD THE CITY 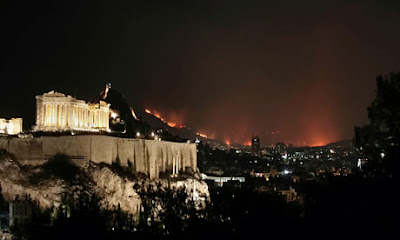 The scene is of wildfires burning at night, of smoke and flames on the outskirts of Athens, making a ring in the distance around the Acropolis. In an account by Guardian reporter, Helena Smith, there's a sense of the scale of destruction:

Environmentalists said that the blazes had caused "biblical damage" to an estimated 120,000 hectares of virgin fir and prime forest.

This is enough to awaken prophetic vision, or at least it should call to mind something of the Ancient Greeks' interpretation of "the cycle of history", at the very least. Climate change is making this part of the Mediterranean world drier; and there are periodical reports and suspicions that developers set some fires during this dry season, in the countryside and along the coasts, to make tracts of land available for more hotels and resorts.

The piecemeal burning of civilization is what we notice more and more on this side of the ocean: the undermining of civilized conduct, the ubiquitous propaganda that spreads paranoia and delusion, and the busy corporate takeover of government, and the normalizing of endless war. And each of these is like a shower of sparks and embers, its own hand of arson, of social damage and upheaval, which has set wildfires that spread across the land. We are engulfed gradually as the smaller and larger fires converge.

The fires are at the gates of the city. Governments that do the bidding of corporations have the arsonist's hand, helping along the inferno. Like those who sold junk mortgages on Wall Street, they are piling wealth into the hands of the few; and if disaster capitalism is not separated from the organs of government, and cannot be closely regulated, it will surely push this world backwards into slavery, where children are once more in the workhouse, forced to stand on treadles all day.

Bush and Cheney's torture chamber is finally being opened for public inspection. They took the United States to the late stage of empire, represented by sadism and circumvention of law, and corruption of office holders. The mistreatment of people held in custody is one measure by which a country is condemned as uncivilized.

CIA and military interrogators threatened prisoners with imminent death, and made horrors of drowning on waterboards; stripping men and boys and leaving them in freezing cold, beating them and threatening their mothers and children with harm. However, the new president is not sure we should dwell on the past.

There must be a line between advertising and indoctrination that has blurred. Corporations are now backing charter schools in the US, where they can control the curriculum. The civic institution of public school will be all that the poor have left; and rundown schools and rundown neighborhoods will go together. The corporate charter school idea uses gentrification by real estate development to push out the unsightly poor.

And it will be an uncivilized state of affairs; if fires such as these make their way to the city. It is also sad to say; but the very last thing this government will give up is its expeditionary army, and its fortified bases overseas, and its military adventures. And these things are unsustainable. They cannot or will not see that the tether will break; for those who rule us cannot imagine what peace is. Their civilization might outlast them; but they insist on their delusion of power, and govern according to that.

Members of the US Congress who have sold out to insurance companies have flung the most incredible fantasies into the public debate over health care. A bland paragraph in the bill that concerns having a doctor reimbursed for an elective discussion with families, about living wills and end-of-life decisions, is distorted into some template for euthanasia. It's hard to relate to this level of dishonesty.

In Canada, people cannot be denied medical help because they have "pre-existing conditions" and they use their health card in any part of the country without worrying about paying out of their own pocket. In Canada, the government can cover every individual, without exception, on 7 percent of GNP. In the USA, the HMO system eats up 9 percent GNP; and fifty million people are still uninsured. The delusion is rampant that the status quo system is not in the business of rationing care and denying certain medical procedures to those who have the insurance.

Homer is clear about the delicacy of Ate, goddess of delusion, when he says,

"her feet are delicate; for she steps not

on the ground, but walks upon the heads of men."