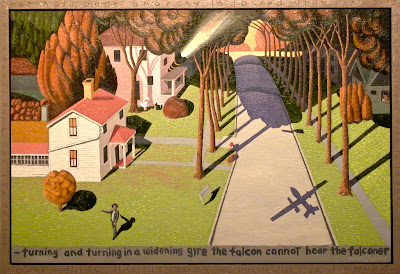 As I ponder this painting by anna missed, it draws me into its engulfing shadows and the bright surreal suburban scene. And the longer I look at it the more I am reminded, in a strange way, of Pieter Bruegel's (circa 1558) painting, "The Fall of Icarus". But the humanity of Icarus, and the risk he took in that ancient myth: ignoring the warning of his father and flying too close to the hot sun, on wings that were fashioned of wax, is replaced by an apparatus, with its angular shadow, its wing's shadow parallel to the shadows of the trees. Its hellfire is descending into the living room.

The point at which it rhymes with Bruegel's masterpiece, is the way everything is faced away from the moment of disaster, like the impact of Icarus; where nothing can be seen of him, other than the small detail in the bottom right corner of the canvas, where only his legs are seen jutting out of the sea. Around Bruegel's 16th Century glimpse of this myth, he paints a shepherd and a plowman, and a sailing ship blown by a strong wind, moving away from the tragedy.

The painting that's featured above is done by an artist who favors wood panels for oil paintings; and is someone whose work I admire, and whose progress I follow. The poetry of W. B. Yeats is used to bring the scene into focus: "-turning and turning in a widening gyre the falcon cannot hear the falconer" [...] "and everywhere the ceremony of innocence is drowned."

During the last Bush administration, the US Republic was pronounced dead or at death's door, by writers as diverse as Lewis H. Lapham and Chalmers Johnson. And some of our best known men of letters (now departed) such as Kurt Vonnegut, Norman Mailer, and Gore Vidal, had conceded that the fate of our country and its governance had fallen into the hands of psychopaths and sociopaths. Only a few days ago, former president, Jimmy Carter, was quoted as saying that the United States "is no longer a functioning democracy".

So far, this has been a pretty bad year for democracy, and for freedom of the press in the United States, where the "ceremony of innocence" drowns. When the Bill of Rights is dead we will have no further defense, in law, against tyranny.

Throughout the Bush years, and well into the Obama presidency, Americans have tolerated the intolerable. But be aware that the airtight Surveillance State is the mortal enemy of press freedoms, for reasons that have become obvious now.

The current administration has been caught spying on journalists; and it is prosecuting James Risen, an NYT award-winning investigative reporter, who has been defending his right to protect the identity of his source,--going back to a story which was published during the Bush administration!  His articles exposed a really harebrained CIA plot to put one over on Iranian scientists, by slipping them technically-sabotaged reactor blueprints. It was supposed to fool those scientists; but it was an especially shoddy forgery, and the scientists were on to the errors almost immediately; and they weren't about to waste resources and years going down some rabbit trail. This CIA caper turned out to be a tragic example of bungling, as well as a stupendous waste of taxpayers' money. And for this dead-as-a-doornail story, this story with a long white beard, Attorney General Holder,--at the pleasure of the president,--is determined to send a distinguished journalist to prison.

This is crude business for a government: killing the morale of real journalists by spying on them, and snooping on their contacts and sources. This kind of behavior signals the beginning of the end of a free society. The only stories left will be the ones the government packages and approves. We, the citizens of this country,  aren't supposed to see the atrocities committed by our Drone President and his military subordinates, when they send hellfire into someone's living room, that rips through the bodies of women and children.

Americans are not supposed to look at the bloody images; and they have few sources that let them hear the broken voices as well, that come out of war, the living witness of a village elder who is dumbfounded and grief stricken, unable to understand why his little village in Yemen is singled out for destruction. But putting a clampdown on information is the obsession of governments that have a lot of corruption and crime to hide, and who need most of all, to put a screen between their public and all the killing that goes on. But what has become of our country? There are now even secret wars, to go with the lists of secret enemies. There are secret laws too--secret laws in the United States--can you believe it? Secret courts and kangaroo courts.

If Americans are faced away from the sight of their enslavement, turned by their own inclination from facing reality; then who else can be held responsible for the country's ruin?--  for the shadow of poverty spreading everywhere?

"Curiouser and Curiouser", said Alice. Yes, there is this too folks, which I shouldn't neglect to bring to your attention. Max Blumenthal just finished covering something called the 2013 Aspen Security  Forum on the upscale side of Colorado, hosted by CNN's congenial Wolf Blitzer.

Blumenthal describes a confab of big military brass and top noggins from the CIA and FBI, "along with the bookish functionaries attempting to establish legal ground work for expanding the war on terror". Please follow the link and read the whole thing if you have the time, because it's amazing and totally spooky. Here's a prime excerpt under the heading Exterminating People:


John Ashcroft, the former Attorney General who prosecuted the war on terror under the administration of George W. Bush, appeared at Aspen as a board member of Academi [you remember, Blackwater]. Responding to a question about U.S. over-reliance on the “kinetic” approach of drone strikes and special forces, Ashcroft reminded the audience that the U.S. also likes to torture terror suspects, not just “exterminate” them.

“It's not true that we have relied solely on the kinetic option,” Ashcroft insisted. “We wouldn't have so many detainees if we'd relied on the ability to exterminate people…We've had a blended and nuanced approach and for the guy who's on the other end of a Hellfire missile he doesn't see that as a nuance.”

Hearty laughs erupted from the crowd and fellow panelists. With a broad smile on her face, moderator Catherine Herridge of Fox News joked to Ashcroft, “You have a way with words.”

But Ashcroft was not done. He proceeded to boast about the pain inflicted on detainees during long CIA torture sessions: “And maybe there are people who wish they were on the end of one of those missiles.”

Competing with Ashcroft for the High Authoritarian prize was former NSA chief Michael Hayden, who emphasized the importance of Obama’s drone assassinations, at least in countries the U.S. has deemed to be Al Qaeda havens. “Here's the strategic question,” Hayden said. “People in Pakistan? I think that's very clear. Kill 'em. People in Yemen? The same. Kill 'em.”


When I was a young man taking university classes, I especially remember reading this poem by W. H. Auden,

About suffering they were never wrong,
The Old Masters: how well they understood
Its human position: how it takes place
While someone else is eating or opening a window or just
walking dully along;
How, when the aged are reverently, passionately waiting
For the miraculous birth, there always must be
Children who did not specially want it to happen, skating
On a pond at the edge of the wood;
They never forgot
That even the dreadful martyrdom must run its course
Anyhow in a corner, some untidy spot
Where the dogs go on with their doggy life and the
torturer's horse
Scratches its innocent behind on a tree.

In Brughel's Icarus, for instance: how everything turns away
Quite leisurely from the disaster; the ploughman may
Have heard the splash, the forsaken cry,
But for him it was not an important failure; the sun shone
As it had to on the white legs disappearing into the green
Water; and the expensive delicate ship that must have seen
Something amazing, a boy falling out of the sky,
Had somewhere to get to and sailed calmly on.